Modernity and New Women: ‘Shopgirls’ in Britain and Japan

講演：パメラ・コックス（エセックス大学）
‘Shopgirls’, Modernity and ‘New Women’ in Britain and Beyond 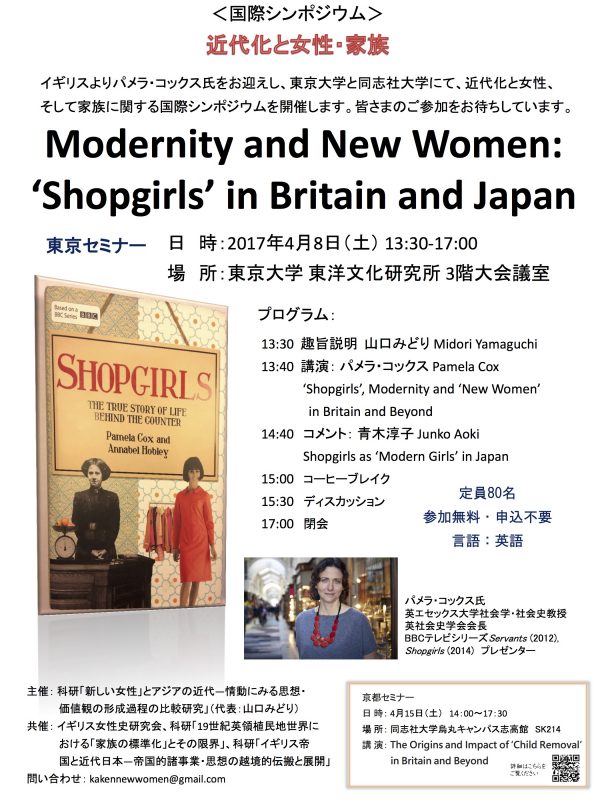 講演：パメラ・コックス（エセックス大学）
The Origins and Impact of ‘Child Removal’ in Britain and Beyond: A Life Course Approach 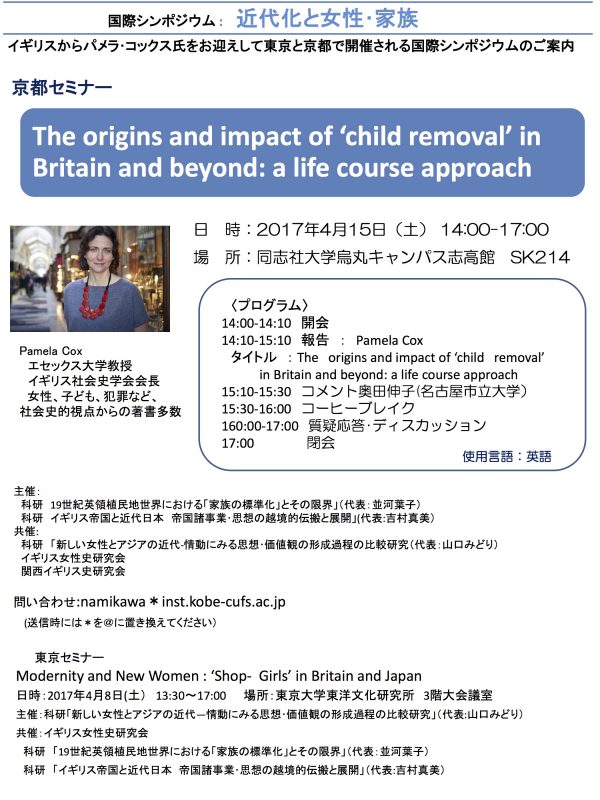 Abstract: Pamela COX, ‘‘Shopgirls’, Modernity and ‘New Women’ in Britain and Beyond’

Britain was famously described by Napoleon as ‘a nation of shopkeepers’. In his eyes, British power was based on commerce rather than grand designs. He was to be proved correct. By 1900, the British service sector was the largest in the world – a highly varied economic sphere employing over a third of all British workers. Most of these workers were based in retail, distribution and transport followed by domestic, care and financial services. Within retail, a growing number of these workers were young women. In the 1820s, a new term was coined to describe them: ‘shopgirls’. Over time, they would come to dominate this previously male-dominated realm but also to embody the rise of urban consumer culture in Britain with its new contested forms of aesthetic, emotional and sexualised labour.  Like other kinds of ‘new women’, ‘shopgirls’ were powerful yet ambiguous symbols of modernity. Unlike other kinds of ‘new women’, however, their history has only recently been addressed. This paper draws on research and images assembled for my recent BBC television series, Shopgirls, and accompanying co-authored book (Cox and Hobley, 2014). It also explores the parallel rise of shopgirls in other parts of the world, including Japan.

In modern period Japan, working women were called shokugyō fujin. In the Meiji era (1868-1912), women were employed as female instructors, nurses and telephone switchboard operators. It is said that the expression shokugyō fujin came into common use after the Sino-Japanese War (1894). Furthermore, the number of these working women grew, starting around 1919 (Taisho 8), as the urban culture of consumerism developed. A typical example of urban shokugyō fujin were the women who worked in the Marunouchi Building, which was also called Maru Biru. Construction of the Marunouchi Building was completed in 1923 (Taisho 12), and it was located in front of Tokyo Station. With 8 stories above ground and one below, it was a modern building for its time. The lower stories contained a shopping mall that was open to the public. In the May 1923 (Taisho 12) issue of the magazine Fujin Gahō, the article Marubiru ni hataraku atarashii josei-tachi (The new women who work in the Marunouchi Building) uses expressions such as “beautiful” and “graceful and deep in thought” to describe typists, shop gilrs, waitresses and short-haired girls. In the same article, shokugyō fujin are referred to as ofisu gāru, “office girl” and sērusu gāru “sales girl.”However, the April 20, 1927 (Showa 2) issue of Tōkyō Shimbun newspaper carried an article titled Modan gāru kyōfu jidai kitaru (The era of fearing the modern girl is coming) which is an article about the corruption of public morals. It refers to the men and women working in the Marunouchi Building as modān danjo (modern men and women), and in particular calls the women who work in the Marunouchi Building “modān gāru” (modern girls) and portrays them as corrupting public morals. The publication of this article was a catalyst for spreading the perception that shokugyō fujin who work in cities were synonymous with Modern Girls, and that in turn necessarily implied that they are all immoral.

Abstract: Pamela COX, ‘The Origins and Impact of ‘Child Removal’ in Britain and Beyond: A Life Course Approach’

Over the course of the nineteenth and early twentieth centuries, over half a million British children were removed from their families and placed into various forms of institutional care. To date, no study has attempted to assess the adult outcomes for those involved in this large scale ‘child removal’. Until recently, such an approach was practically impossible, given the difficulties of tracing the trajectories of individuals born in that period, and especially given that the vast majority were drawn, from socially marginal and geographically mobile households. In recent decades, however, the large-scale digitisation of historical sources has opened up new research methodologies that can generate new kinds of data to answer new kinds of research questions. Crime historians have been at the forefront of both digitisation and life-course approaches in Britain (for overview see, Hitchcock, 2013; Godfrey 2016).

The adult outcomes of children raised in care are a matter of much concern in Britain today. Care leavers account for a quarter of the contemporary adult prison population, a tenth of the young homeless population, and over two thirds of sex workers, and often repeat family cycles of social exclusion (Centre for Social Justice, 2015: 4). This paper argues that, by contrast, the first generation of boys and girls passing through the early care system were more likely to have experienced a modest improvement in their life chances. It draws on unique analysis of the life courses and life chances of 400 adults who passed through early care and corrections institutions as children in the northwest of England from the 1860s to the 1920s. It is part of a wider project to be published within my new co-authored book, Young Criminal Lives: Life Courses and Life Chances in England from 1850, to be published by Oxford University Press (Godfrey, Cox, Shore and Alker, 2017 forthcoming).

This project has global implications. ‘Child removal’ – or the placing of children in trouble or at risk within institutions run by state, civil and religious organisations -became a troubling policy norm within the early British welfare state. Its problematic legacy continues today. In turn, it helped to lay the normative foundations of child removal across British colonies, from India to the Caribbean, and also provided a core model for the later removal of large numbers of indigenous children by settler populations in Australia and Canada. Together with French and Dutch models, it also proved influential in parts of east Asia. This project examines its origins and applies a new historical life-course approach to the evaluation of its ambiguous impacts.